Sutton Rodeos Inc. returning a long standing tradition at the Sitting Bull Stampede of providing quality stock. Their stock has been selected to perform at 48 of the 50 National Finals Rodeos. Through five generations Sutton Rodeo has had the pleasure of producing rodeos at every level – 4-H, high school, college, Indian National Finals, SDRA & PRCA. 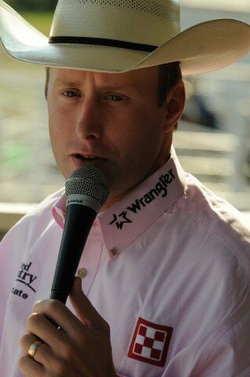 In the sport of rodeo, the fury strikes in lightning-fast athleticism and memorable action. It’s also when Scott Grover shines. He’s been the arena announcer of the Prairie Circuit Finals Rodeo, a position he held many years. It’s an honor that is bestowed upon the greatest names in the game, and Grover has placed himself on that list. On top of that, he has been selected as one of two announcers to call the action at the 2014 Ram National Circuit Finals Rodeo.

The Wild Horse Race has been said to be a rodeo in itself. Unlike the bucking stock used in the standard riding events, these horses are truly wild. They’ve never been ridden before, let alone saddled, and these mustangs plan on keeping it that way! These uncooperative beasts are called “outlaws” which is a term of endearment compared to some of the names tagged on them by the competitors.

Allen Dessel and Lance McIlvain return to protect the bull riders as well as entertain the crowd with their bull fighting techniques.

Gizmo McCracken has been entertaining crowds across the Country for years. He became a member of the PRCA (Professional Rodeo Cowboys Association) in 1992 only 22 years ago.

Since that time the list of accomplishments has grown beyond our belief. Working 11 PRCA Circuit Finals Rodeos, Dodge National Circuit Finals, Cheyenne Frontier Days twice, Nominated for Comedy Act of the year twice and our biggest accomplishment being a feature act at the 2005 Wrangler National Finals Rodeo. Gizmo takes pride in the fact that his humor is good, clean, family style comedy. "Sometimes it just don't seem right to have this much fun and get paid for it." said Gizmo.

Gizmo travels the country from Canada to Texas, from the East Coast to the West Coast logging some 45,000 miles a year through dozens of states. Gizmo started his career as bullfighter and moved into stand-up comedy on a show in Branson, MO. Gadgets and gizmos that went sour were often part of his routine, hence the name "Gizmo, The World's Greatest Inventor." " A lot of Clowns and Specialty Acts sell themselves with a bucking car or a dancing horse." said Gizmo "I supply a Character," and that is just what Gizmo is. Many Characters will find their way into your town and your arena. "I like to keep people looking for me and wondering what I am going to do next." said Gizmo.

The acts share a high energy, clean , family oriented feel which adds a fresh new atmosphere to any rodeo he is a part of. Gizmo is the Best Comedy Entertainer that this sport has to offer. Regardless of whether you have seen him before or this is your first experience I am confident that you will leave laughing

Since 1988, John Payne has thrilled rodeo fans around the world. He rides a variety of good horses and mules in his full throttle exhibition of genuine cowboy skills with longhorn steers, buffalo and wild horses. Moving all these animals around an arena the show reaches its grand finale with all atop a custom stock trailer reflecting the excitement and true spirit of the west!

Wolves on the Water Tournament